A self-educated photographer. Deborah Austin created her own small business, "Finding Home Photography" in 2007. Most of her work focuses on area culture, events, landscapes, architecture, and nature but she has recently ventured into the realm of photomanipulation with a series of kaleidoscopes made from her own photos.

Her photos have been used by the Washington County tourism board and the Post Star for their publications. She has had photos published by DRG Publishing, as well as various magazines including “American Revolution” and “Philateles” . In 2009, she had her first local gallery show at BJS Artworks in Glens Falls, N.Y. , was a participating artist in the 2013 Third Thursday Art Walk and another show in 2014 at the Hudson River Music Hall in Hudson Falls, NY. She was also a contributing artist in the 2011 "Have a Seat, Glens Falls" event. In 2018, she was a contributing artist in a show "Aesthetic Movement" at LARAC, a Glens Falls, NY based arts organization gallery. She is currently working on a large mural project for the Canal St. Marketplace in Fort Edward, NY

As well as photography, she also enjoys writing, painting, knitting, and reading. She currently has three novels on Kindle, "Hiding in Plain Sight", and "Descent" and "Ascension" which are the first two books in a four part series. She has recently returned to painting after a long absence. Deborah resides in rural Fort Edward, N.Y 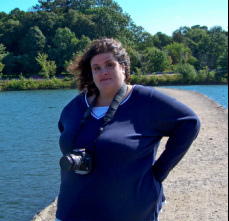 As far back as I can remember, I have always loved art in all its forms. I was either drawing, writing, embroidering, crocheting, painting, or using any other medium that came near to me always wanting to create. I had even planned to go to college to further my artistic career but was unable to do so as my father had taken early retirement and so instead of asking him to pay for college on a limited income, I found gainful employment. I returned to my artistic roots every so often, however, drawing, writing, doing needlework from time to time but never doing much with what I produced.

All of this changed when I bought an old 35mm camera at a garage sale in 2005 for next to nothing and began to experiment with it, experiencing a sort of revelation if you will. My father, toward the end of his life had himself become an accomplished photographer in my eyes and I felt a sort of connection with him as I started to take more photos, paying closer attention to the world about me, looking for the perfect angle, the best lighting.

Soon I graduated to a newer camera, then a better camera, teaching myself along the way, reading, shooting, learning by error, then by success, discovering that the camera is only one part of the equation. The finest equipment in the world makes little difference without the eye of an artist to see the shot. I haven't stopped shooting since and though I have returned to the medium of painting which has consumed a good amount of my free time for the past couple years, I have always come back to the lens in the end, embracing the art of the captured image which has enchanted me, inspired me to show people how wonderful, beautiful the world is when seen, slowly, one moment at a time
.
Deviantart Gallery